Thoughtforms, or a self titled first entry. 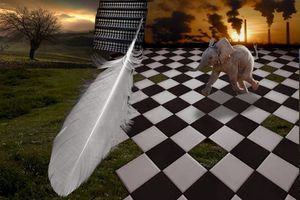 This blog idea started way back in 2012. It was called 'The Desert' for a little while, and mostly contained lyrical snippets and random things. I looked at it one day and thought 'what the heck is this?'. Some two years on, it made no sense. Add to this 'The Desert' had lived up to it's name, collecting tumble weeds and desolation in equal measures. Time for a revamp.

Social media comes and goes, but a blog is fixed in place. The life of a tweet is all but a few hours, or a day if you're lucky. A blog? It's fixed. Facebook, when it's not on the news for general breeches against common decency, has it's perks, I suppose. But it's on the way out, and so is Instagram, and all the others, present and future. Social media proves itself to be impermanent.

Blogs have been around since the dawn of the internet. Blogs are tried and tested. This here blog is my social media.

As for the title a Thoughtform, as a theological concept, is ethereal matter, objects or beings, generating from one's thoughts and emotions. 'Thoughtform', as a term, is used in western occultism and witchcraft...and now as a blog title for a quizzical songwriter. Hey, if the shoe fits, right?

So welcome to Thoughtforms, metaphysical constructs for a metaphoric world. Put the kettle on!