From Folklore to Piano

“I want the music to enchant you into some kind of resolve. In this manner it matters not what I intend a song to mean.”

Sky Bishop’s unique ear for rhythm and arranging translate into a surreal dreamlike sonic landscape of beauty, ferocity, passion and love. She explains:

“The songs are driven by a central emotion. The music comes first, that’s the emotion, the first language, and it’s the music which reveals the lyrics, never the other way around for me. I find the writing process exhilarating.”

With eclectic tastes steeped in an ever evolving career Sky Bishop’s chameleon-like talent for stylistic shifts are evident across every release.

Born in Melbourne Australia to a musical family Bishop’s passion for music, art and story telling began early. Classically trained on piano by her grandmother, Sky Bishop learned to play Chopin and Beethoven by ear before she could read music.

“My grandmother had a walnut Challen baby grand in her living room, that was my first experience of a piano. I loved the idea of playing something much bigger than myself. It comes alive and it’s a bit dangerous.”  Recalls Bishop.

Sky Bishop uses her mezzo-soprano vocal range in rock and choral styles. By fourteen Bishop was singing in numerous pub bands with musicians double her age. While simultaneously learning the ropes of music production and live performance through first hand experience.

The young Sky then turned her attention to guitar.

“Dad’s a guitarist and he loves teaching so it was more a question of when than if I’d pick it up. But guitar doesn’t come as naturally as the piano does for me, I had to really work at it.”

Raised in a new age hippy household, and inspired by spiritual and occult literature, Sky Bishop shied away from the mainstream pop scene and concentrated only on the music which spoke to her. Fondly she recalls:

“My childhood mostly consisted of music, tarot cards, incense, crystals, stoned parents and the odd ouija board moment. When you’re the weird kid you either embrace it or reject it. I embraced it and the music is an evolution of that.”

Not surprising it’s within an otherworldly realm of hidden ancient lores Sky Bishop feels truly at home. The dreamlike song Tomten, referencing Scandinavian folklore, tells the story of a domestic nocturnal gnome who secretly watches the humans prepare for their daily grind, as he prepares for sleep. Sky fondly remembers the recording process:

“While I was writing it [Tomten] I could hear a magnetic force within the music, a rusted garden gate swinging in the breeze beckons you into the Tomten world. I figured I’d feed a synthesised string section through a reversed reverb. But that didn’t sound like it did in my mind, so that [the strings] was scrapped. I found my magnet sound in feeding the piano through a Leslie Cabinet, then reversed the reverb, and there was my rusted gate.”

With the vast musical genres she grew up with present today in both her contemporary solo work and as a classical pianist, Sky Bishop continues to channel emotion into unique and vivid sonic vignettes.

Completely self recorded Sky Bishop’s 2012 debut The Diplomat dealt with songs under the theme oppression of spirituality. Bornographic, a gothic ballad of codependency with its dark satirical lyrical refrain; ‘I love you’ lulls the listener into a false sense of security while it seduces its willing victims into a deadly embrace. 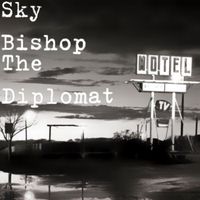 Inspired by the passing of fashion designer Alexander McQueen, the song Crocodile Skin carries the haunting line ‘Even fairies cry like men’ above the ghostly knocking of Scottish Highland drums and wistful choral vocals.

Georgia, inspired by the 1991 film Paris Trout, talks about racism, brutality and injustice during the 1940’s in the US state of Georgia.

“I wrote the music before I saw the film. The music was based on the feeling I got when people spoke of the film. I wrote the lyrics after seeing the film. It’s told from the point of view of Paris after his death.” Explains Sky. 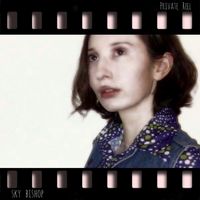 In her follow up album Private Reel, also self produced, Sky Bishop tackles the topic of privacy in the modern era. The stand out rock track Jarrah, with its thumping drums, swirling guitars and typically Sky Bishop childlike sinister vocals taunts the listener with the incantation; ‘Eeeyahaa, eeeyaha, are you in there?’.

The quirky Luxury Queen, about the inner strength and sharp wit of a cross dresser, is given a seventies arrangement reminiscent of Genesis.

The folk strings in Peyote cast forewarning to the American War On Drugs. The song tells the story of a land spirit’s witnessing of past and present injustices on the Mexican boarder. Peyote, written four years before the Trump administration, takes on new meaning in today’s political unrest.

The stand out rock thumper Ostrich Plume spirals into different sonic rooms with its bridges and choruses. It’s instrumentation building and falling against Bishop’s layered vocals. 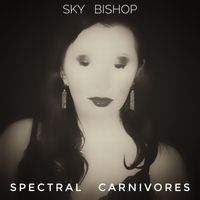 The dark atmosphere of the instrumental Oblivion has hints of Nine Inch Nails. Bishop recalls the night she wrote it:

“Oblivion was written on the spot, coming from these thoughts. It set the tone for the rest of the [Spectral Carnivores] album. The title is ironic, we fear death because of oblivion, but ultimately it’s a moot concept because love is eternal and so is music and nature.”

The Creature And The Boy toes the line between song and short story. Set to the backdrop of piano and Celtic harp, the spoken word piece sees Bishop taking on two male roles, a young curious boy and a wise ethereal creature. The pair sharing their experiences of the same Earth can move even the most ardent skeptic.

In 1997 to 1999 Sky studied still life painting under the tuition of German artist Gisela Zimmer.

In 2008 she completed film production (audio techniques, cinematography, film editing and production design) at The University of Melbourne.

In between rehearsals and songwriting Sky Bishop is currently writing a novel, and has begun work on a web series.

Today Sky describes her career as “Typically Gemini” owing to her distinctly varied roles. One part sound, one part visual.